Johana Moscoso is a performance and fiber artist, born in Colombia and living in the United States since 2007. For the artist, textile and the body are inextricable for exploring migratory tales between South and North America and how this movement influences culture, labor, and self-determination.

The popular myth of Latin American immigrants coming to the United States to pursue the so-called American Dream of gaining fame and fortune or stealing jobs is a distortion. Many Latin American populations have been affected by U.S. policies and interventions on their soil, prompting individuals or entire families to journey to escape crippling poverty, political instability or financial crises. Historically, the U.S. has pushed trade policies that have devastated Latin American markets, have overthrown democratically elected governments, financed torture, and fueled drug wars with the influx of assault weapons over the border that have landed in the hands of cartels. These hostile acts have made life difficult in Latin America, ushering in a new and ongoing era of oppression and co-dependence after the end of European colonialism in the region. 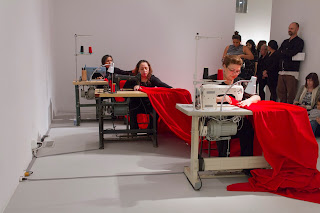 These collective experiences are one reason that Moscoso has invited others to participate in her performative and fiber art installation, Round and Round at the Chicago Artists Coalition. She put out a call for participants by going on foot through the Chicago neighborhoods of Pilsen and La Villita -- areas with the highest concentration of Latinas -- and visiting shops that sell fabric or do alterations. By engaging one-on-one with shopkeepers and patrons, the artist shared her family’s migration stories and was open to listening to theirs. Through these exchanges, Moscoso developed a rapport and tapped the creative capacity of 5 seamstresses. 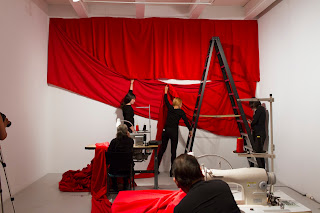 There are four sewing machines, delineated by numbers of latitude and longitude, throughout the gallery that poetically trace the migration of Moscoso’s female ancestors and her very own. Each station is a coordinate where the family made a new home. The first three stations represent Colombian towns: San Juan de Sahagún in Córdoba, where the artist’s great-grandmother lived; the island of San Andrés to where Moscoso’s grandmother moved; and the capital city of Bogotá where the artist was born. The fourth location represents the city of Chicago where Moscoso currently lives and works. The red fabric that moves among the stations connects the women’s voices and migratory experiences through the labor of sewing and the humming of the machines. Moscoso, along with the seamstresses, will take the completed textile and adhere it to the wall, tracing the geographic boundaries of a matrilineal migratory tale. 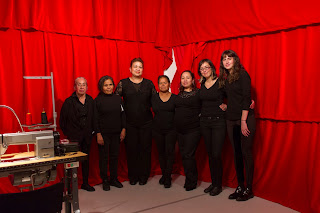 With Round and Round taking place in the month of November during a contentious election season, it brings to mind thoughts about movement again. After this long and hideous presidential campaign, we should remain vigilant and active to the politics that impact the fabric of our lives. Regardless of the election outcome, our fighting days are not behind us, but rather ahead of us, for economic and gender equality and the right to determine where to live.

Posted by johana moscoso at 9:28 PM